Keith and Renate have books for sale this holiday season: $10 each. Free delivery in Calgary. Visit our website to see samples of our work. Contact us at languageartstudio@gmail.com. 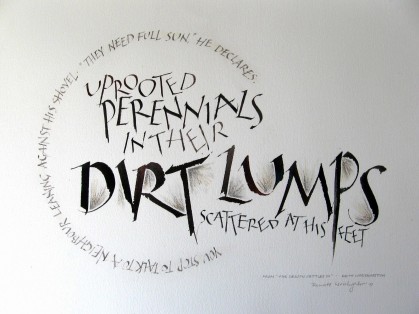 (Excerpt from THE SEASON SETTLES IN, by Keith Worthington. Renate’s letters are made by manipulating the nib angle of the Capitals.

Apples of Gold – italic and capitals, lettered by Renate

Two examples of Proverbs 25:11, lettered in Capitals, Versal “A”, and Italic. The lettering in the Saint John’s Bible was my inspiration for these pieces. 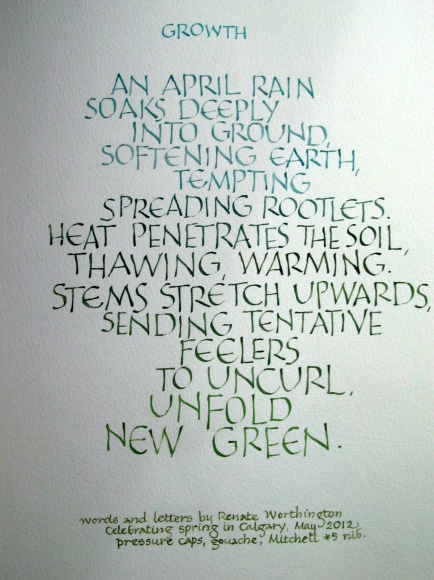 GROWTH: Words and letters by Renate, are presented as a page in the Bow Valley Calligraphy Guild book celebrating one of the BVCG milestones.

WAITING FOR SNOW by Keith Worthington. Renate’s lettering is a mix of Italic letters and informal Capitals. 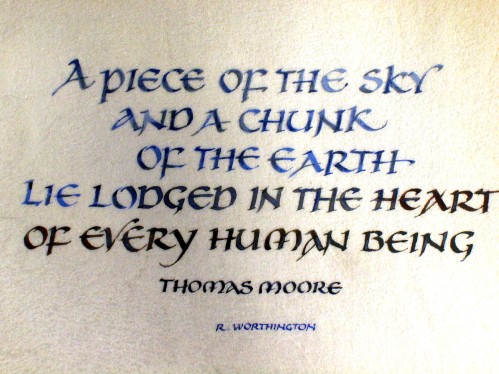 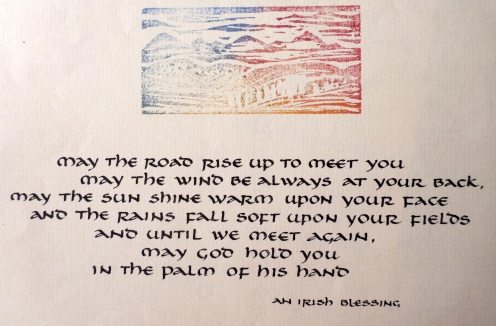 The Irish Blessing in Uncial letters with a hand-cut eraser stamp:

I was told you were killed near Kandahar
while I skied at Lake Louise.
A roadside bomb awaited you
as I cruised among glades and trees.

Your body parts, they gathered and lay
in a coffin sealed so tight.
They brought you home in the cargo hold
beneath our flag of red and white.

Remember those times (not long ago)
we skied together at Lake Louise?
The same old mountains gathered ’round
to watch us do as we pleased.

Your tour of duty became Kandahar;
mine continued at Lake Louise.
How can there be on the very same Earth
two places such as these?

On my final descent from Top of the World
regret will accompany me
and two young men will disappear
among the ghostly trees.

from Poet on a Cargo Plane

A black and white photograph of Mom
on the dock at Lake Minnewanka—
shy smile, stylish dress, young legs.

I like to think she and Dad arrived by train,
Roy’s CPR pass in his breast pocket.
I like to think they held hands in the day coach,
anticipating their future,
excited to be a couple.

This is years before life began to take its toll—
before children, the War, a return to work,
before accidents and other setbacks.

That bright summer day near Banff,
if I had been a stranger strolling nearby,
I would have thought,
What a pretty girl.
What a glorious world.

Heading toward the adjacent rink,
I feel I am confronting her.
We are foreigners:
she with her hijab and long black dress,
me—helmet, visor—full equipment.
I smile; she smiles back.
Our common ground—skates on ice.

She pushes a training aid for balance,
hardly lifting her blades,
as though afraid the surface will crack.
I turn to watch her journey—
elegant in its awkwardness.

from After the Flood: Hockey Poems 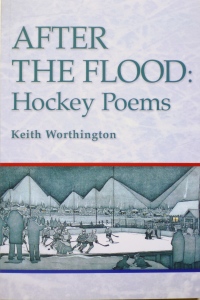 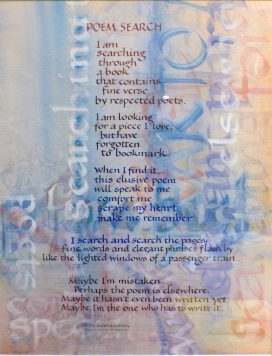 POEM SEARCH- Keith Worthington,lettered by Renate,  from PUFFS OF BREATH ©2007.

Restoring this commemorative scroll might have been one of the most important lettering projects that I’ve encountered in thirty-five years of calligraphy. The size of the board (3 feet by 6 feet) added to the “bigness” of the project.  Thank you to St. Paul’s for an amazing experience.

These few lines are part of the poem “Old-Timers Tournament” from Keith’s poetry book, After The Flood: Hockey Poems. Renate’s artwork is called a “calligram” and features the names of many old-timer hockey teams. The original size of the hockey player is 4 by 6 inches, and was drawn using several sizes of fine-tipped markers. Season’s greetings to all! 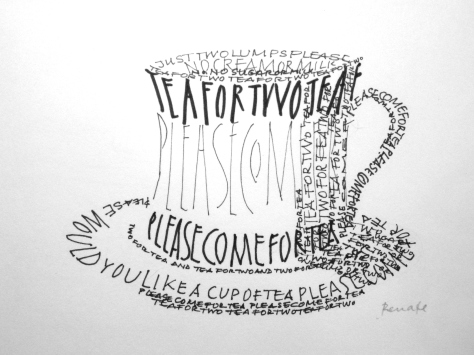 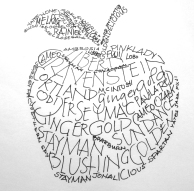 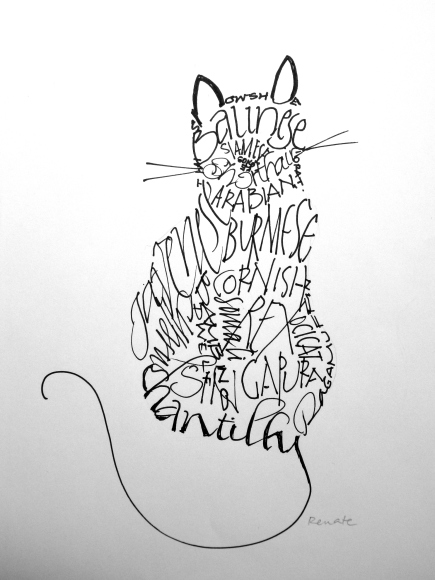 “calligram” of cats by Renate

This style of calligraphy is a good choice for longer poems and quotations. It is vertical, therefore easier to read, and relates to present-day fonts, so is a familiar set of letters. Some calligraphers use the traditional heavier ascenders; I have chosen to keep them slim. Here are some examples where I have used my own particular adaptation of this style. 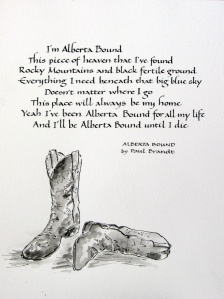 ALBERTA BOUND -excerpt from lyrics by Paul Brandt,  lettering and boots by Renate. Another two versions of Alberta Bound is written in “Neuland” below. 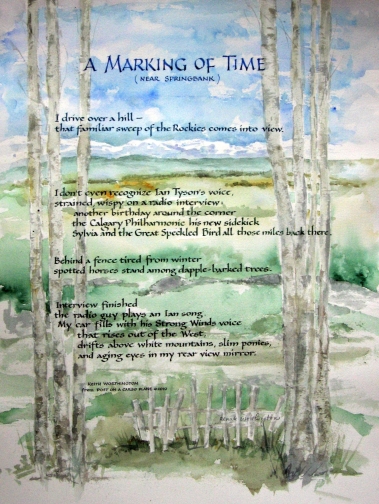 A MARKING OF TIME: poem by Keith, artwork and “Carolingian” lettering style by Renate. 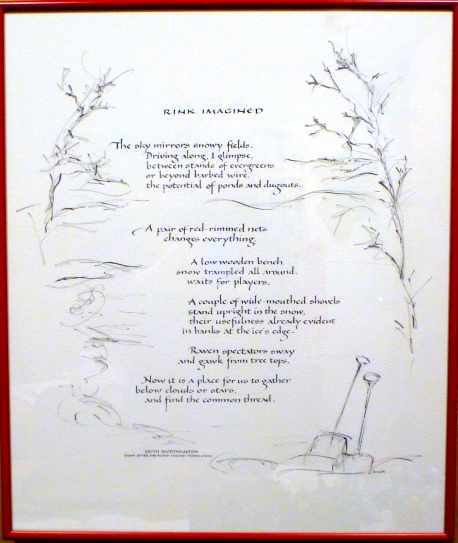 RINK IMAGINED- poem by Keith Worthington, from AFTER THE FLOOD: Hockey Poems ©2013,  lettered by Renate,